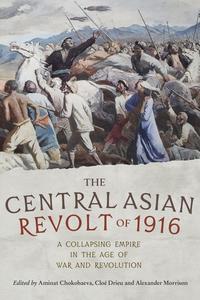 Alexander Morrison, Fellow of History at New College and Advisory Committee Member for the Oxford Centre for Global History, has published an edited volume on the 1916 Revolt in Russian Central Asia. The volume is called 'The Central Asian Revolt of 1916: A Collapsing Empire in the Age of War and Revolution'.

The 1916 Revolt was a key event in the history of Central Asia, and of the Russian Empire in the First World War. This volume is the first comprehensive re-assessment of its causes, course and consequences in English for over sixty years. It draws together a new generation of leading historians from North America, Japan, Europe, Russia and Central Asia, working with Russian archival sources, oral narratives, poetry and song in Kazakh and Kyrgyz. These illuminate in unprecedented detail the origins and causes of the revolt, and the immense human suffering which it entailed. They also situate the revolt in a global perspective as part of a chain of rebellions and disturbances that shook the world's empires, as they crumbled under the pressures of total war.