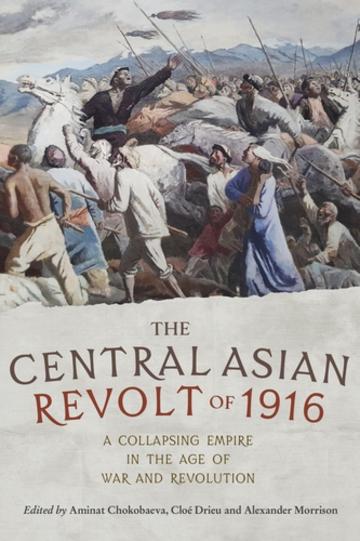 The 1916 Revolt was a key event in the history of Central Asia, and of the Russian Empire in the First World War. This volume is the first comprehensive re-assessment of its causes, course and consequences in English for over sixty years. It draws together a new generation of leading historians from North America, Japan, Europe, Russia and Central Asia, working with Russian archival sources, oral narratives, poetry and song in Kazakh and Kyrgyz. These illuminate in unprecedented detail the origins and causes of the revolt, and the immense human suffering which it entailed. They also situate the revolt in a global perspective as part of a chain of rebellions and disturbances that shook the world's empires, as they crumbled under the pressures of total war.

Note on translation, transliteration and dates
Glossary and abbreviations
Editors' introduction
Aminat Chokobaeva, Cloé Drieu and Alexander Morrison
1 - Why in Central Asia, why in 1916? The revolt as an interface of the Russian colonial crisis and the World War
Tomohiko Uyama
2 - The exemption of peoples of Turkestan from universal military service as an antecedent to the 1916 revolt.
Tatiana Kotiukova
3 - The ­­­­1916 uprisings in Jizzakh: economic background and political rationales
Akmal Bazarbaev and Cloé Drieu
4 - The "virtual reality" of colonial Turkestan: how Russian officials viewed and represented the participation of the Local population in the 1916 revolt
Oybek Mahmudov
5 - Fears, rumours, violence: the Tsarist regime and the revolt of the nomads in Central Asia, 1916
Jörn Happel
6 - When the nomads went to war: the uprising of 1916 in Semirech'e
Aminat Chokobaeva
7 - Scales of violence: the 1916 Central Asian uprising in the context of wars and revolutions (1914-1923)
Niccolò Pianciola
8 - Violent acculturation: Alexei Kuropatkin, the Central Asian Revolt, and the long Shadow of conquest
Ian W. Campbell
9 - Refugees, resettlement and revolutionary violence in Semirech'e after the 1916 revolt
Alexander Morrison
10 - Links across time: Taranchis during the uprising of 1916 in Semirech'e and the "Atu" massacre of 1918
Ablet Kamalov
11 - Making political rebellion "primitive": the 1916 rebellion in the Kazakh steppe in long-term perspective (ca.1840-1930)
Xavier Hallez and Isabelle Ohayon
12 - From Rebels to refugees: memorialising the revolt of 1916 in oral poetry
Jipar Duishembieva
13 - A Qirghiz verse narrative of rebellion and exile by Musa Chaghatay uulu
Daniel Prior
14 - Domesticating 1916: the evolution of Amangeldi Imanov and the creation of a foundation myth for the Kazakh Soviet Socialist Republic (1916-1939)
Danielle Ross
Select bibliography
Index

Alexander Morrison is Fellow and Tutor in History at New College, Oxford. He is a historian of empire and of colonial warfare and an Advisory Committee Member for the Oxford Centre for Global History.

Aminat Chokobaeva is a Postdoctoral Fellow at Nazarbayev University.