WORKSHOP: Ecologies of Knowledge and Practice: Japanese Studies and the Environmental Humanities

A day and a half interdisclinary workshop for international postgraduate and early career researchers in the humanities.

AIMS OF THE WORKSHOP

How does research on Japan inform ecological practice that is pertinent beyond the framework of Area Studies,and vice versa? If we were to place nature at the core of our studies of human activities, what new kinds of interdisciplinarity and knowledge would be possible, and how would we reorganize our academic disciplines? This international workshop brings together Postgraduates and Early Career Researchers within the Humanities for an inter-disciplinary discussion with guidance from established scholars and practitioners.

In today’s world of planetary-scale environmental crises, intellectuals are increasingly urged to cultivate a symbiosis between knowledge and practice and to engage with each other beyond disciplinary divides. Historically, Japan has claimed an uniquely harmonious relationship with nature. Yet this cultural rhetoric of ecology has faced challenges for its apparent discordance with the reality of environmental destruction in Japan.

The field of Japanese Studies outside Japan has also been criticised: on the one hand, for exoticising Japan as aunique “other”, yet conversely, for forcing Japan into a hegemonic model of universal (Western) modernity. While such ideological controversies are ongoing, the study of Japan in the twenty-first century is becoming increasingly and inescapably intertwined with the rise of global environmental problems such as climate change, nuclear catastrophe, deforestation and threats to marine life. The challenges of ecocriticism follow hot on the heels of the politics of still-prevailing Orientalism.

In the rapidly changing academic and atmospheric climates of the twenty-first century, the career paths of currentgraduates and early career researchers are likely to follow very different trajectories to those of our seniors. The workshop seeks to open a dialogue among this emerging generation of Japan scholars concerning how the production of knowledge of Japan may be linked to new forms of engagement with contemporary ecological concerns. 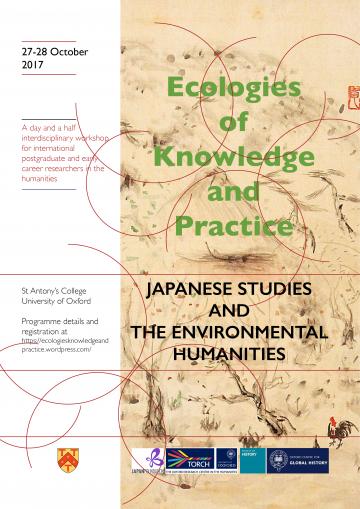