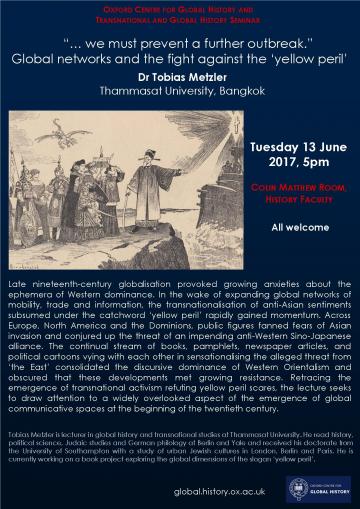 Late nineteenth-century globalisation provoked growing anxieties about the ephemera of Western dominance. In the wake of expanding global networks of mobility, trade and information, the transnationalisation of anti-Asian sentiments subsumed under the catchword ‘yellow peril’ rapidly gained momentum. Across Europe, North America and the Dominions, public figures fanned fears of Asian invasion and conjured up the threat of an impending anti-Western Sino-Japanese alliance. The continual stream of books, pamphlets, newspaper articles, and political cartoons vying with each other in sensationalising the alleged threat from ‘the East’ consolidated the discursive dominance of Western Orientalism and obscured that these developments met growing resistance. Retracing the emergence of transnational activism refuting yellow peril scares, the lecture seeks to draw attention to a widely overlooked aspect of the emergence of global communicative spaces at the beginning of the twentieth century.

Tobias Metzler is lecturer in global history and transnational studies at Thammasat University. He read history, political science, Judaic studies and German philology at Berlin and Yale and received his doctorate from the University of Southampton with a study of urban Jewish cultures in London, Berlin and Paris. He is currently working on a book project exploring the global dimensions of the slogan ‘yellow peril’.