LECTURE: Professor Jean Allman, 'Toward a Post-Mortem of the African Revolution: Rethinking the Global Sixties'

'Toward a Post-Mortem of the African Revolution: Rethinking the Global Sixties'

If the Global Sixties were marked by the spirit of freedom and the politics of revolt, from Paris to Berkeley, from Mexico City to Prague, where does Africa fit into the chronology? The continent certainly launched this momentous decade, with seventeen countries winning their independence in 1960 alone. This was the “Year of Africa,” the beginning of the African Revolution. Or so it was thought. By 1968, fourteen military coups had swept independent African governments from office and the nation-state project appeared a dismal failure. What perished in those critical years and how? What, if anything, should we mourn?

Jean Allman is the J.H. Hexter Professor in the Humanities at Washington University in St. Louis, where she directs the Center for the Humanities. Allman’s research and published work engages nineteenth and twentieth century African history, with a focus on gender, colonialism, nation, and the post-colonial state. She is the incoming president of the African Studies Association in the United States.

The lecture will be followed at 6:15pm by a reception in the Buttery, in the Hilda Besse Building of St. Antony’s College

In partnership with the African Studies Centre. 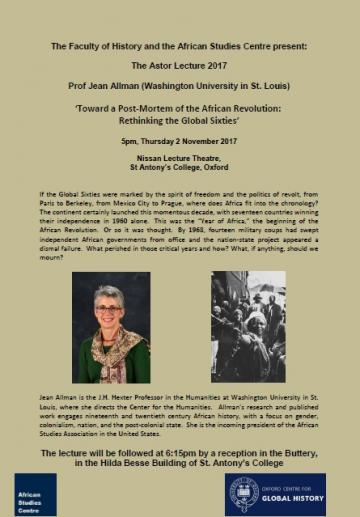