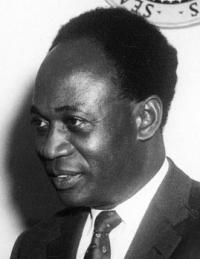 A graduate student workshop on 'Gender and Postcolonialism' will take place on 1 Nov, 3pm-5pm in the History Faculty Lecture Theatre with Professor Jean Allman, Washington in St Louis. Contact global@history.ox.ac.uk to register.

‘Kwame Nkrumah and the women in question:  Reflections on the makings of the postcolonial archive’

Kwame Nkrumah, the leader of Ghana’s independence struggle and its first Prime Minister and then President, was a major theorist of pan-Africanism and neocolonialism and arguably one of the most important leaders of what was known in the 1960s as the “African Revolution.” During the course of his rule, Nkrumah attracted around him a small cohort of expatriate women, who served in various official capacities, but who also became his intimate confidantes and remained so, even after the military coup that ended his rule in 1966. By foregrounding and exploring the bonds that tied four expatriate women to Kwame Nkrumah, this paper offers a new gendered, global perspective on the African Revolution and, as importantly, on the generation of evidence and the creation of the archives with which histories of that revolution can and will be written.