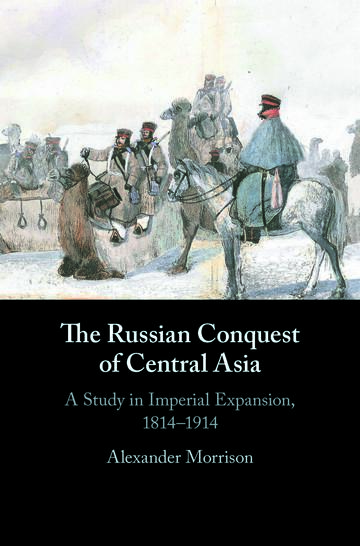 Alexander Morrison's new book The Russian Conquest of Central Asia has just been published by Cambridge University Press, providing the first comprehensive military and diplomatic history of the conquest to be published for over a hundred years.

The Russian conquest of Central Asia was perhaps the nineteenth century's most dramatic and successful example of European imperial expansion, adding 1.5 million square miles and at least 6 million people - most of them Muslims - to the Tsar's domains. From the earliest conflicts on the steppe frontier in the 1830s to the annexation of the Pamirs in the early 1900s, Alexander Morrison gives a detailed account of the logistics and operational history of Russian wars against Khoqand, Bukhara and Khiva, the capture of Tashkent and Samarkand, and the bloody subjection of the Turkmen, as well as Russian diplomatic relations with China, Persia and the British Empire. Based on archival research in Russia, Kazakhstan, Uzbekistan, Georgia and India, memoirs and Islamic chronicles, this book explains how Russia conquered a colonial empire in Central Asia, with consequences that still resonate today.  Link to publisher's website.

Alexander will be discussing the book at the Oxford Seminar for the Caucasus and Central Asia with Professor Scott Levi (Ohio State University) pn Tuesday 1st December 5pm. Register via the following link:
https://medsci.zoom.us/meeting/register/tJYpfu6tqz4oG9YtWikSykiLcvcbcQDY5ddw

Alexander Morrison is a Fellow and Tutor in History at New College, Oxford.