John-Paul Ghobrial, Global History and Microhistory: a Supplement Volume of Past and Present 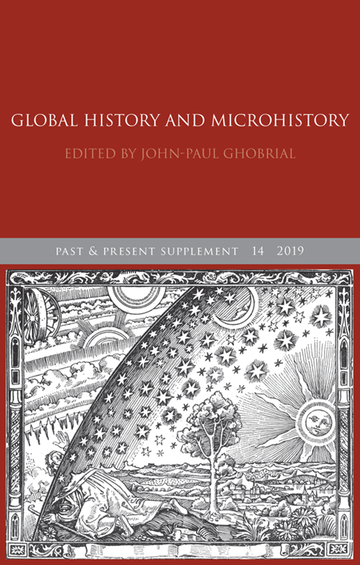 Two areas and approaches to historical writing which captured imaginations during the later twentieth and early twenty-first centuries were microhistory and global history. Microhistory connected with cultural history became a popular historical methodology from the later 1970s, especially in France and Italy. It gained a wide public reception around the film 'The Return of Martin Guerre' and Natalie Zemon Davis' historical contribution to this.

Global history, by contrast, developed from the late 1990s out of comparative economic history, especially of China, South Asia and Europe in a debate on 'divergent' paths of economic development. Both these micro and macro approaches have generated wide interest among historians and the general public, and global history has become the focus of new research centres as well as journals and MA programmes.

A number of microhistorians now seek to engage in the histories of places, events and individuals in a way that also captures the history of global connections as brought to life by a new generation of global historians. Some global history recently has gone the way of 'big data' collection, wide structures and geographies; the people and the events are getting lost in more general macro narratives. There are many scholars who see themselves as global historians whose work is rooted in archivally-based research into the histories of places, events and individuals.

The AHRC Global Microhistory network brings these groups together to discuss the question, 'Can there be a global micro history?'.

Part I: The Prospect of Global Microhistory: Two Points of View

Playing with Scales: The Global and the Micro, the Macro and the Nano, 23

Part II: Experiments in the Space Between Global History and Microhistory

Where the Devil Stands: A Microhistorical Reading of Empires as Multiple Moral Worlds (Manila–Mexico, 1577–1580), 83

Three Ways of Locating the Global: Microhistorical Challenges in the Study of Early Transcontinental Diplomacy, 110

Microhistories of Long-Distance Information: Space, Movement and Agency in the Early Modern News, 179

Recalcitrant Seeds: Material Culture and the Global History of Science, 215

Moving Stories and What They Tell Us: Early Modern Mobility Between Microhistory and Global History, 243

The World in a Book: The Creation of the Global in Sixteenth-Century European Costume Books, 281

History Without Scale: The Micro-Spatial Perspective, 348

John-Paul Ghobrial is Associate Professor of Early Modern History, University of Oxford; and Lucas Fellow and Tutor in History at Balliol College.