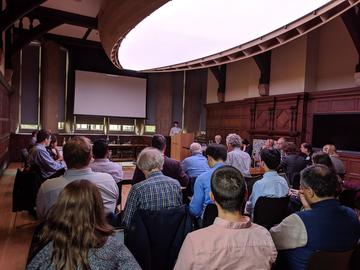 Sacred Kingship in World History: Between Immanence and Transcendence brought together a group of international speakers and participants for two days of stimulating discussion at Brasenose College on May 25-26.

The aim was to bring together an international group of scholars, otherwise divided by discipline (history, classics, oriental studies, literary studies, religious studies, anthropology), geography (China to the Andes) and period (Ancient Assyria to ISIS in the twenty-first century), in a common endeavour to reflect on the long-term history of the relationship between religion and politics – in a way that embraced grand narrative and bold theorization. We wanted to insist upon making progress in terms of conceptualization and analytical synthesis rather than provide a venue for specialist mutual interrogation. In this way, the sphere of religion would be drawn into global comparative history, which has generally previously been reserved for economic and political hypotheses.

In order to advance these ambitious objectives, the conference organizers, Azfar Moin and Alan Strathern wrote a 10,000 word framing paper which proposed a set of conceptual terms and mechanisms for understanding long-term change, and invited speakers to respond to it. We were delighted to see how speakers took up this challenge. After our introduction, the speakers were Jan Assmann (Cophenhagen) on Ancient Egypt and Judaism, David Graeber (LSE) on the Axial Age and kingship in comparison, Michael Puett (Harvard) on Ancient China; Peter Gose on Incas divine kingship (Carleton), Nicole Brisch (Cophenhagen) on Ancient Mesopotamia, Lynette G Mitchell (Exeter) on Ancient Greece; Aziz Al-Azmeh (Budapest) on Caliphal Islam; Jos Gommans (Leiden) on South India; Faisal Devji (Oxford) on modern India, Robert Yelle (Munich) on early modern Europe; Nicole Jerr (USAF) on modernity literature.Marshall Sahlins (Chicago) provided a paper on supernatural sovereignty in global comparison, which we discussed at the end of the first day.

The full list of papers can be found [here] 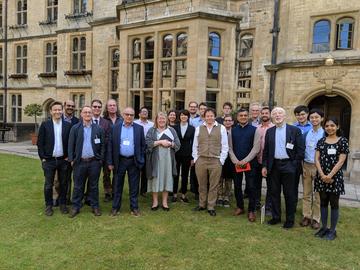 By the end, the discussion was coalescing around some common terms, and producing not only fertile questions but also some promising signs of answers. Among these areas were: determining the conditions which gave rise to the Axial Age or prevented the emergence of transcendentalism; the ways in which China could fruitfully be incorporated into the paradigm; the symbiotic emergence of the state and religion; the logic of heroic versus cosmic forms of divinization;  the way in which kingship itself might express a struggle between the people and the ruler, with one dimension of this taking place in the sphere of law; the  longue durée history of Islam both with and without kingship, and the consequences for modernity of the absence of the king’s body. Participants and attendees expressed that they found the whole occasion liberating and energising, and we are now preparing the resulting publication.