I joined the History Faculty in 2013: my time is divided equally between History and the inter-disciplinary African Studies Centre. I studied at the universities of Westminster, London and Sheffield, and I have taught at the universities of Pretoria, Keele, Sheffield Hallam and Sheffield. I previously worked for a number of non-governmental organisations, including Save the Children.

My research interests focus on political and social change in southern-central Africa in the second half of the twentieth century. I'm interested in the interaction between local social movements, nationalist parties and global forces in shaping post-colonial Africa. I have also carried out research on labour history and on the politics of mining in Africa, as well as an edited collection of the papers of one of Valentine Musakanya, an important intellectual and political figure in independent Zambia. I recently completed a research project on the Katangese gendarmes as a way of understanding the social and political history of war in central Africa.

In July 2016 I will start a new four-year research project, 'Comparing the Copperbelt: Political Culture and Knowledge Production in Central Africa', supported by a European Research Council Consolidator Grant. You can hear me talk about the project here. This project provides the first comparative historical analysis – local, national and transnational - of the Central African copperbelt. This globally strategic mineral region is central to the history of two nation-states (Zambia and Democratic Republic of Congo (DRC)), as well as wider debates about the role of mineral wealth in development.

The project will examine the copperbelt as a single region divided by a (post-)colonial border, across which flowed minerals, peoples, and ideas about the relationship between them. It will explore the interaction between intellectual understanding of copperbelt politics and society and the copperbelt's own political culture, exploring the interchange between academic and popular perceptions. This project will investigate the hypothesis that the resultant understanding of this region is the result of a long unequal interaction of definition and determination between western observers and African participants that has only a partial relationship to the reality of mineral extraction, filtered as it has been through successive sedimentations of imagining and representation laid down over nearly a century of urban life in central Africa. 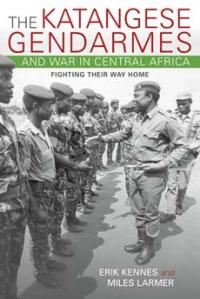 Erik Kennes and Miles Larmer provide a history of the Katangese gendarmes and their largely undocumented role in many of the most important political and military conflicts in Central Africa. Katanga, located in today's Democratic Republic of Congo, seceded in 1960 as Congo achieved independence and the gendarmes fought as the unrecognized state's army during the Congo crisis. Kennes and Larmer explain how the ex-gendarmes, then exiled in Angola, struggled to maintain their national identity and return "home." They take readers through the complex history of the Katangese and their engagement in regional conflicts and Africa's Cold War. Kennes and Larmer show how the paths not taken at Africa's independence persist in contemporary political and military movements and bring new understandings to the challenges that personal and collective identities pose to the relationship between African nation-states and their citizens and subjects.